Canadian Rental Rates Soar In Half Of Largest Cities

Rental rates are soaring in half of Canada's largest cities, according to new data from PadMapper.

Toronto is still the nation's priciest rental market, with the median one-bedroom rent growing 2.9 per cent to $2,140, while two bedrooms stayed stable at $2,800 last month.

Vancouver is still in second place, with rents staying flat last month at $2,000 and $3,200 for a one or two-bedroom, respectively.

Halifax saw the largest monthly increase in one-bedroom rents, up 5.5 per cent to $960 a month. 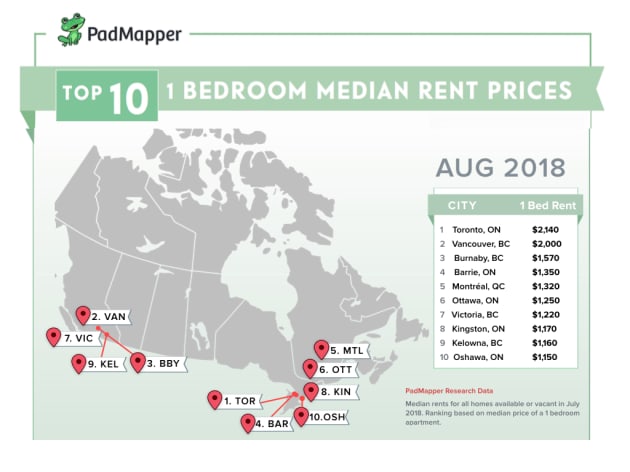 However, the year-over-year numbers paint a bleaker picture for some of Canada's priciest markets. One-bedroom rents in Toronto have spiked 15.7 per cent in just a year. And while Vancouver rents have remained somewhat steady — growing by only 0.5 per cent in a year — rents have soared by nearly 15 per cent in both Burnaby, B.C., and Montreal.

Rental affordability is a major issue across Canadian cities, as roughly one-third of Canadian households are renting. According to the Canadian Rental Housing Index released in May, 1 in 5 households are giving half their income to the landlord.

Four in ten renters are also putting more than 30 per cent of their income towards rent and utilities, above the cutoff level for what the Canadian Mortgage and Housing Corp. considers affordable.